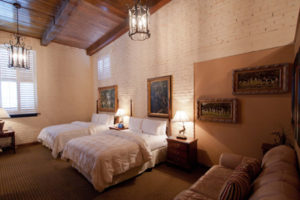 Double Luxury for those traveling with a friend or family member who want separate beds.

The Ansonborough Inn… searching for a boutique hotel as historic, unique and welcoming as the city of Charleston itself?  Look no further than this special property located in the heart of the historic district.  The Inn is located within the Ansonborough neighborhood of downtown Charleston, so named when Lord Anson of England won the property in a spirited poker game with famous Charlestonian Thomas Gadsden.  Lord Anson was sent to Charleston in 1724 to protect the coast of South Carolina from pirates.  Admiral Anson was by no means a mere gentleman with a title – he was an exceptional sailor by any standard.  He was the third Englishman to circumnavigate the globe. On his many voyages he captured Spanish ships filled with treasures.  The most celebrated being in the mid-1740’s when he abducted a Spanish vessel carrying booty worth a million and a quarter pounds of sterling.  The Ansonborough district stretches from King Street to the edge of the Cooper River, between Hasell and Calhoun streets.  These farmlands were divided into a borough of 25 lots in 1746.

Originally a three-story stationer’s warehouse (circa 1901), the initial conversion was designed as individual condominium units.  As a result our suites are larger than most hotel rooms.  They range from 450 to 750 square feet, which is very different from a typical 288 sq.ft. hotel room.  Following this original renovation, the Ansonborough Inn has been transformed into the charming all-suite inn that our guests find today. Exposed heart pine beams and local fire red brick were commonly used in buildings of the period and these elements were incorporated in the décor throughout the Inn.

The Inn was completely remodeled in 1999 by owners George & Sandra Fennell. In keeping with the nautical heritage of Admiral George Anson, the Fennells have overseen the transformation of the Inn into one of the Historic District’s truly unique properties. You’ll notice their attention to detail…handsome historic antiques and reproductions and a vast collection of original oil paintings throughout the guest suites and common areas.

There are no reviews yet.