Excerpt from “My First Summer in Sierra” by John Muir – July 22:

“Many others, pines as well as firs, bear testimony to the crushing severity of this particular storm.  Trees, some of them fifty to seventy-five feet high, were bent to the ground and buried like grass.  Whole groves vanishing as if the forest had been cleared away, leaving not a branch or needle visible until the Spring thaw.  Then the more elastic undamaged saplings rose again, aided by the wind, some reaching nearly an erect attitude, others remaining more or less bent, while those with broken backs endeavored to specialize a side branch below the break and make a leader of it to form a new axis of development.  It is as if a man, whose back is broken or nearly so and who was compelled to go bent, should find a branch backbone straight up from below the break and should gradually develop new arms and shoulders and head, while the old damaged portion of his body died.” 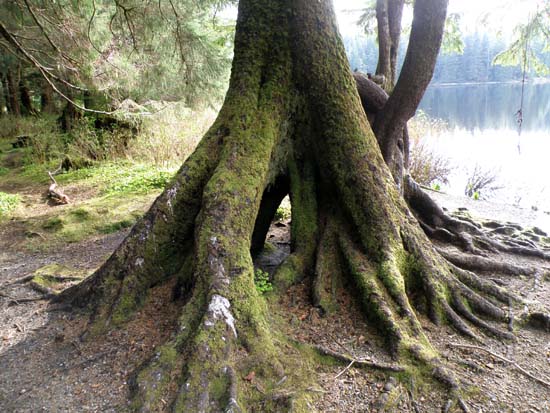 I hadn’t touched my Nook e-reader in nearly a month.  I didn’t know what I wanted to read, but reading about the grandeur of a National Park (prior to it becoming so) that I could neither visit nor walk through right now did not appeal to me.  But two nights ago, I picked up and began reading, and this is the story I read.

I want to expand upon it, to tell you about how I see myself as one of the saplings that found new ground after being broken by a storm.  This is true.  I want to tell you about how I can only hope my back, after surgery on Monday, will be renewed like those new branches.  I hope it to be true.  Mostly, I just wanted to share how awesome it is when you are shown signs in other mediums that seem perfectly directed to you at the time you experience them.  THIS is one of them.