Excerpt from the memoir “Keepin’ it Kevin” on our First Thanksgiving as a married couple:

For the first time in as long as I could remember we had no Thanksgiving plans.  My grandmother was having knee surgery, and my Mom’s side was waiting to get together over Christmas.  Everyone was traveling, working, or busy, and Kevin and I wanted a traditional Thanksgiving as it was our first traditional U.S. Thanksgiving together.  There was only one way to achieve that: we would have to cook it ourselves.

We gathered some recipes, including my mother-in-law’s stuffing recipe, and went shopping.  I had prepped some of the things, like the stuffing, the night before.  That night we set our alarm for 6 a.m. the next morning to put the turkey in our apartment size oven to be cooked in time for lunch.  We were going to use a roasting bag to ensure the turkey stayed moist and was not overdone. The problem first began when the alarm never went off.  Our bedroom was in the basement, with no windows, and when we awoke to find out it was already 10 am, we frantically ran upstairs, seasoned the bird, stuffed it, threw it in the bag and then into the oven.  This may have also involved the bird nearly landing on the floor…may have.  We doubted it would be finished cooking in time, so I called my parents, whom we had invited over, and told them to come about 1.5 hours later than we had originally planned in hopes the bird would be done by then. 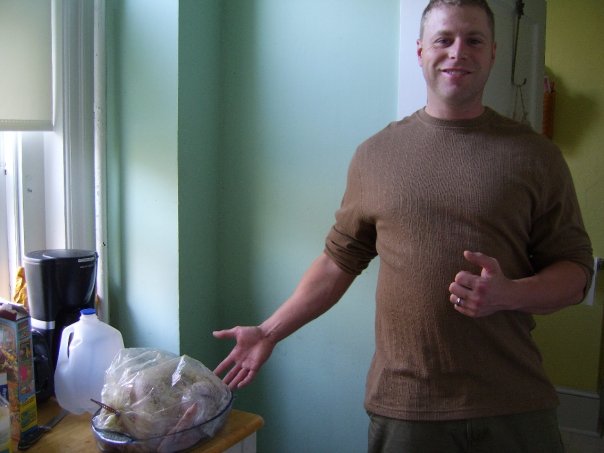 It was a whirlwind.  After the bird was in the oven, Kevin and I got showered and dressed to look slightly more presentable. We planned to make corn, homemade mashed potatoes and other thanksgiving-esque foods to make our first Thanksgiving feast complete.  The dining room table was actually our prep area since our kitchen had no counter space (I’m not exaggering, it had 1 square foot of counter space, that was all) so we moved all the prep work into our weird teeny side room and the  table into the living room where we could dine.  I set the table with our nice dishes and it actually looked stylish without feeling overcrowded.  I couldn’t believe we were cooking a feast in our tiny apartment with an apartment sized mini-oven and no counter space.  It certainly was a feat to behold. 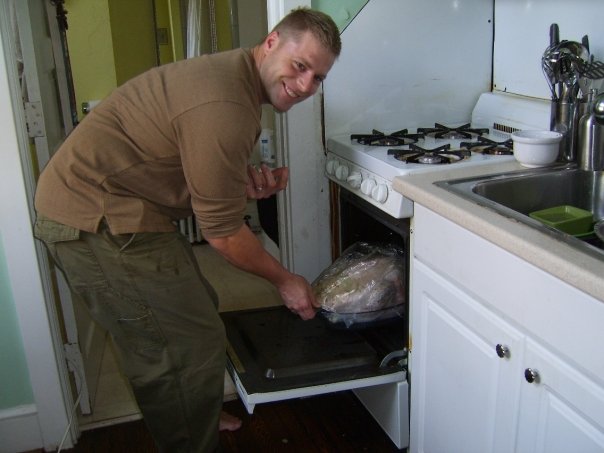 The turkey finished cooking shortly after my parents arrived and dinner was served.  It was delicious, with enough food to feed us for several meals afterwards.  Even my parents enjoyed the traditional feast, and Kevin was never as proud as when we took that turkey out of our tiny oven.  We were official: the newlyweds who had cooked and entertained their first holiday together.
After we put away the food we decided to relax rather than clean up.  My Dad plopped onto our hand-me-down couch and soon our new kitten Darrell was cuddling in his lap like the little champ that he was.  My Dad was smitten with the little kitten.  It felt weird to have Thanksgiving dinner with just the four of us but it also felt just right for all that was happening in everyone’s lives.  My brother was in Michigan with his girlfriend’s family, my sister with her husband’s family, and us with our parents wishing his Mom and Brother in Canada could have joined us.