Updated: When Spring Sent us to Havre De Grace

Days like these remind me of Kevin.  It’s that first scent of Spring Warmth.  When you wake up and the Sun is already energizing the day.  It’s the day when you feel like you can suffer through a chilly morning in shorts, capris, skirts and sandals knowing that the afternoon temps will warm you to the core.  It’s the first day that you feel you should escape to the beach.  At least, that’s the feeling and memory it conjures up in me.  While these days I think “ooo, let’s go camping” or “man, I wish I was on my motorcycle” instead of fishing on the shore, 4 years ago, it was all about the fishing for Kevin and I.

Here’s a sample from the first draft of the memoir when we encountered one of these days in March 2008 and we ended up in Havre de Grace the following weekend:

Before heading down to the “beach beach”, we planned our return to Havre de Grace for a fishing day trip to try out our new gear.  We were spoiled by Assateague and its lack of regulatory licensing, so we scoped out locations where we could purchase a Maryland Fishing License so we could fish in the bay or a nearby pier.  We arrived at the large boating pier in Havre De Grace around 10 am and purchased our licenses before driving around the quaint island-like town looking for the perfect spot.  I preferred one with a bathroom, but one couldn’t be choosy when it came to good fishing locations.  We found one uninhabited by other fisherpeople and near one of the bay bridges.  We lugged our gear, cooler with our packed lunches, and chairs to the water.  I was more anxious to read my book than to fish; Kevin was the opposite.
I sat down and began reading without touching my line because I knew that Kevin could take up to an hour or more to set up his rig, especially the first time out in the water that season.  The day was slightly cloudy, but it wasn’t raining so we hoped to enjoy a few hours of fishing to break in our new equipment.  The problem was that fishing near rocks is much different than fishing off of sand.  (We had discovered this the year before when we attempted to fish off the jetty in Ocean City, Maryland and Kevin broke his fishing rod trying to pull his line off the rocks).  The casting style was different, and so was maneuvering the line.  We tried to pick a spot away from the most treacherous rocks and settled in.  Kevin set up both our lines and I attempted to watch for fish tugs while reading my latest favorite book.  It felt good to be out, but we both itched for sand under our toes.  This was a quick and easy getaway, but it wasn’t the ocean.  The waves didn’t pull at us, the sand wasn’t burning beneath my feet, the air was salty but stagnant.  This wasn’t our dream.  When it begin to rain, and we still had no bites, we returned home to plan our next trip out to the water.  This time, to the “beach beach”.

Updated: I found this picture of Kevin at our 1 year anniversary trip to Kevin just a month or so before this story came to life: 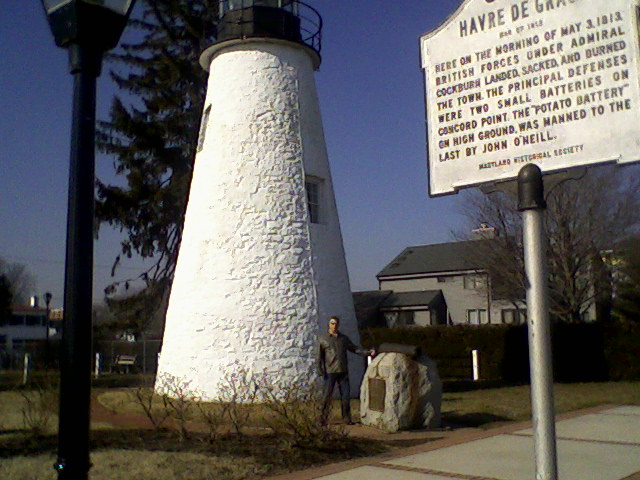